This major award provides the opportunity to recognize an outstanding body of work, holding up examples of performance and achievement to which all New Urbanists may aspire. The award is based upon five benchmarks: 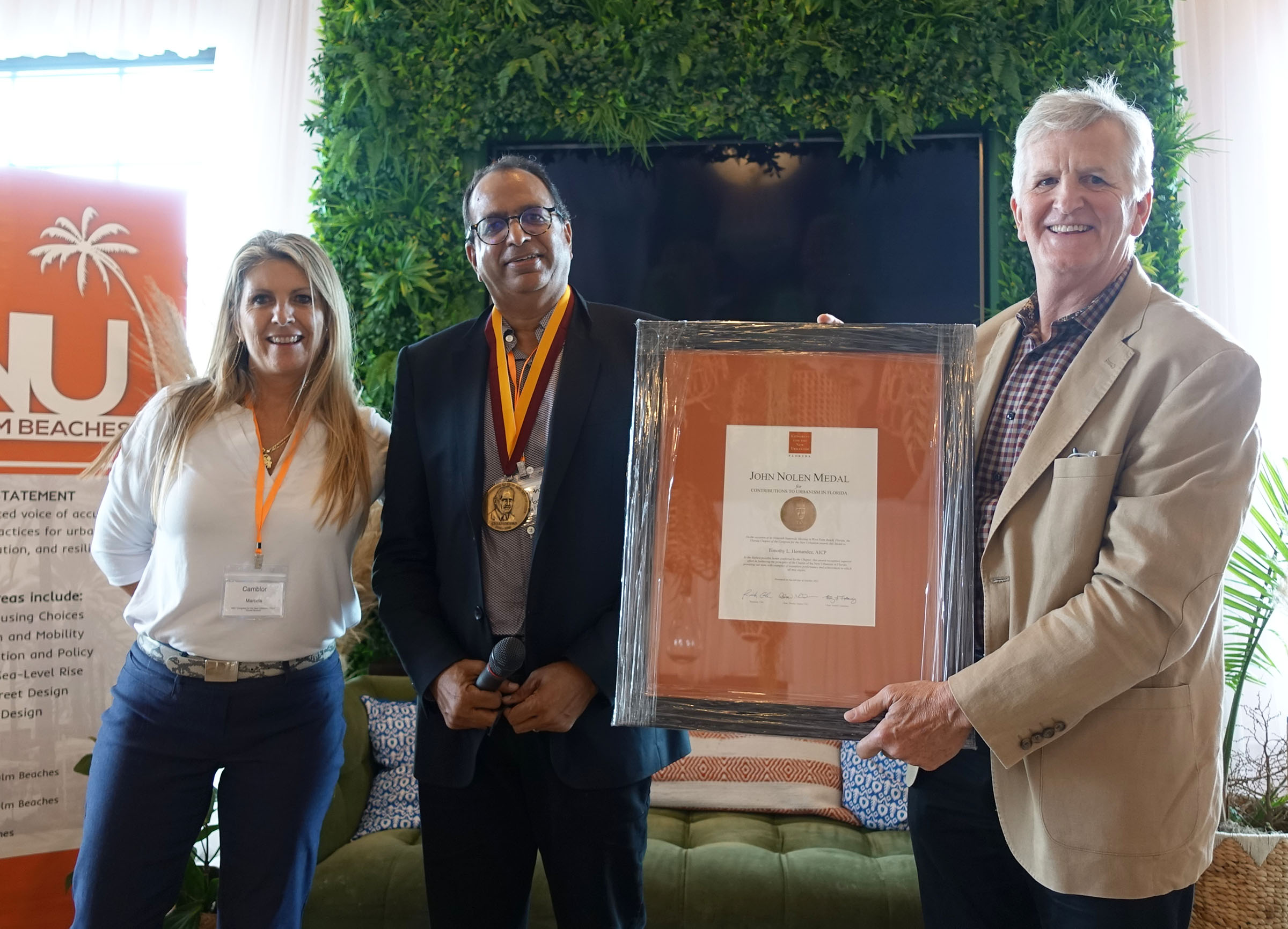 Recipient Craig Ustler, MAI, CCIM, Ustler Development, Inc. | Mr. Ustler is the master developer of a series of projects in downtown Orlando attracting residents and new businesses, including Thornton Park and Orlando’s Creative Village. The Creative Village is a mixed-use innovation district that will bring education, employment, business and housing together in the same community. Creative Village uses New Urbanism as its development standard and is one of the largest transit-oriented developments in the southeast United States. Mr. Ustler is the owner and president of Ustler Development, Inc. 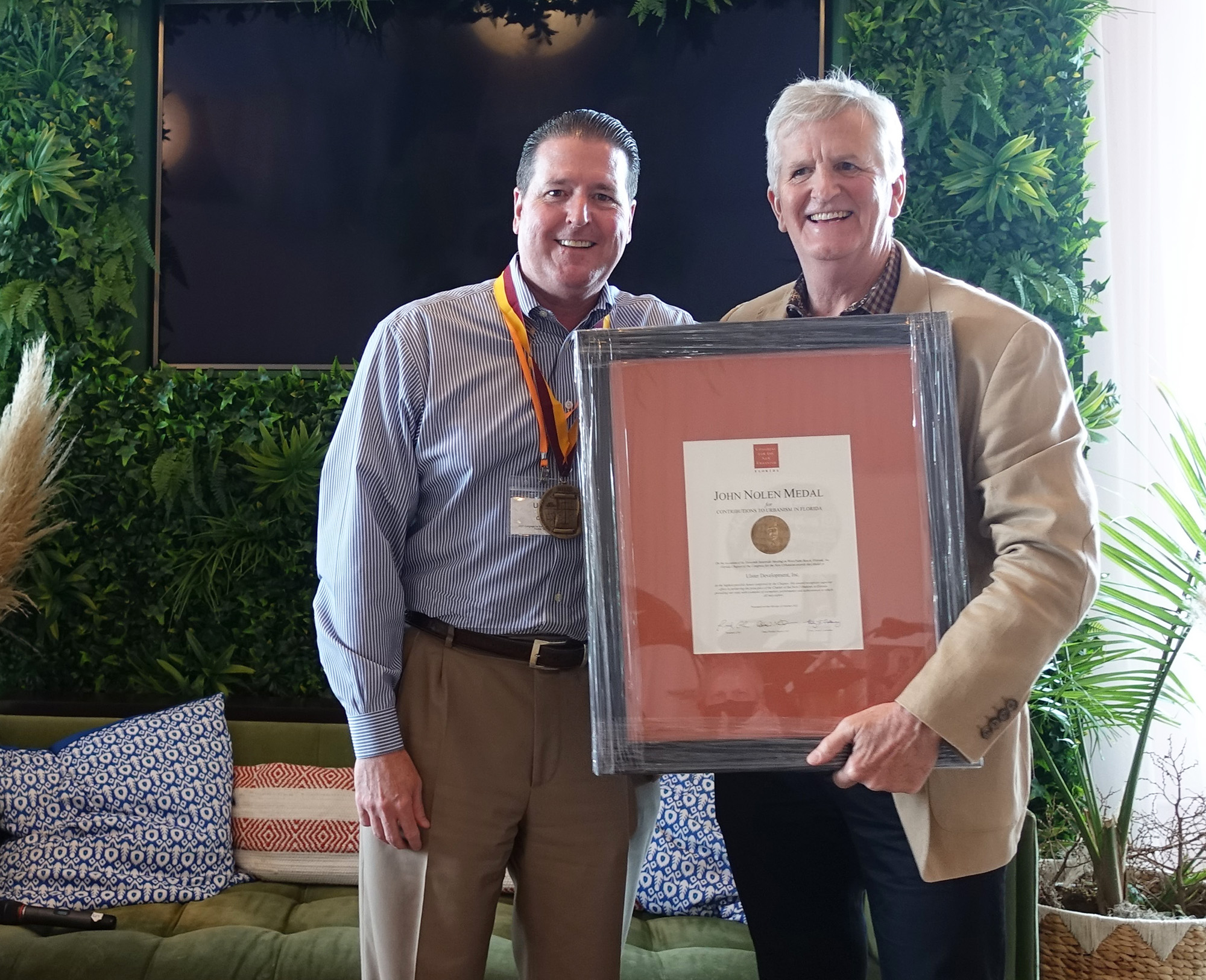 You can read an excerpt of Professor Stephenson’s book HERE. 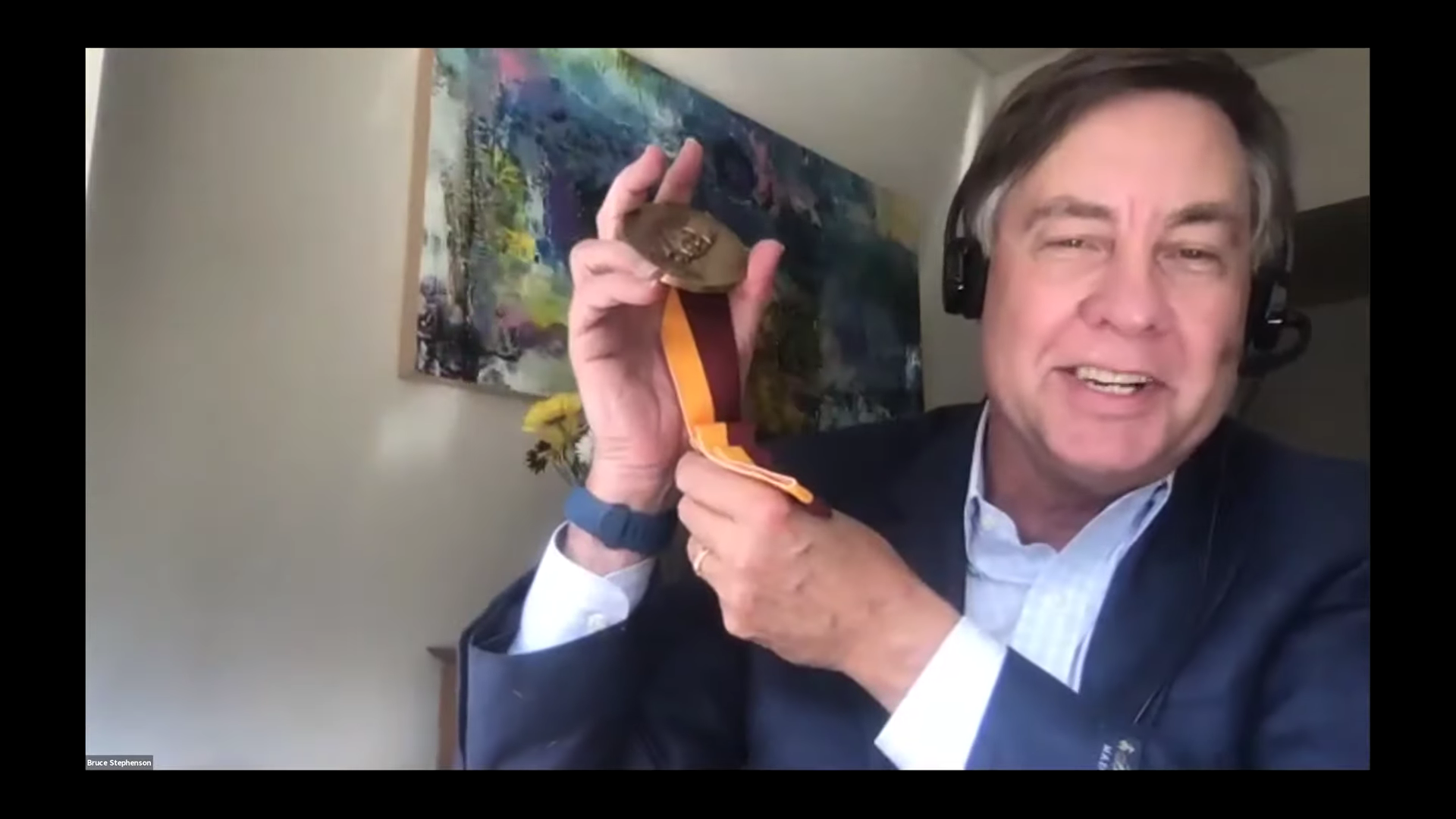 Recipient Richard "Rick" Hall, PE, Hall Planning & Engineering |  Rick was recognized for implementing transportation standards for greater walkability. As an engineer registered in 23 states, and a seasoned veteran of 200+ Charrettes with DK&P, DPZ, and M&P, many streets are safer and more comfortable for walkers due to his sincere discussion on blending quality street design and quality urban design. As noted in Thadani’s Reflections on Seaside, he implements complete street design. He implements context-based street concepts as advanced by FDOT, and as guided by DeWayne Carver and Billy Hattaway. 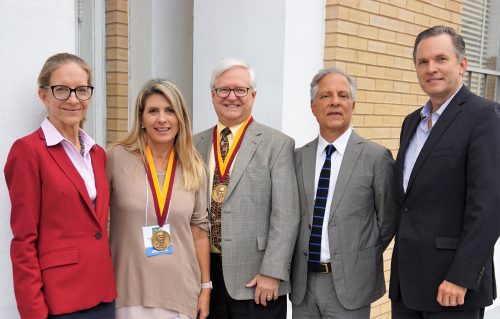 Recipient Marcela Camblor-Cutsaimanis, Marcela Camblor & Associates  | Marcela, of Marcella Camblor & Associates has been a leader in Florida overseeing projects that implement New Urbanism principles, both during her tenure as TCRPC’s Urban Design Director and as Principal of her own firm. Marcela led the Sustainable Communities regional plan Seven50,  a sustainable blueprint for seven counties over fifty years. 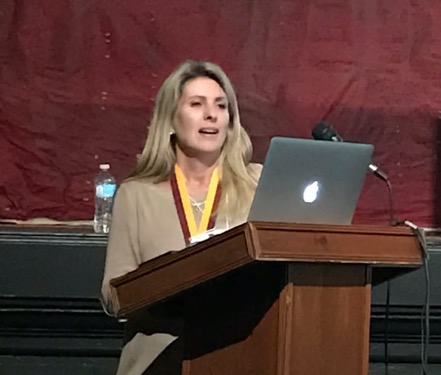 Recipient Billy Hattaway, PE, MBA, Florida Department of Transportation District One Secretary | Billy received the award for his leadership as Florida Department of Transportation District One Secretary in collaboration with CNU member DeWayne Carver and State Roadway Design Engineer, Michael Shepard, in becoming the nation’s first DOT to incorporate the transect into a context based approach to street design into its policies and design manuals, transforming the agency’s approach to street design for the urban environment. 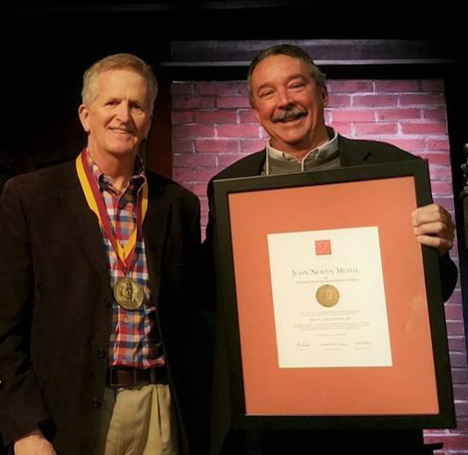 Recipient City of Delray Beach  |  The City of Delray Beach was recognized for the City’s leadership of urban preservation, redevelopment and densification over several decades and through sequential administrations, setting an example for scores of other towns and cities in Florida, pioneering pedestrian friendly medium density residential building types (tuck-under townhouses, apartment courts) and Main Street retail. 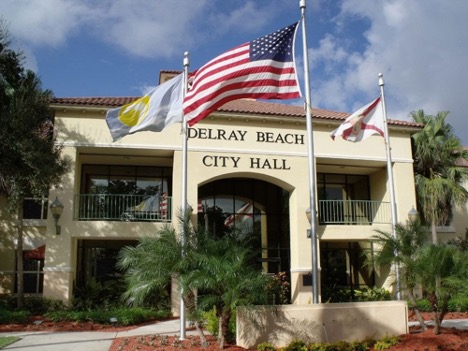 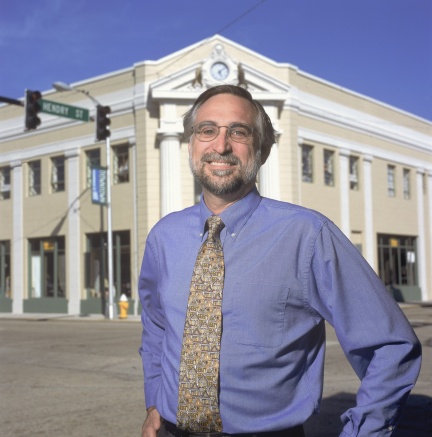 Recipient Duany, Plater-Zyberk & Company | The Florida Chapter of the Congress for the New Urbanism awards CNU founders Andres Duany and Elizabeth Plater-Zyberk, principals of DPZ, the Nolen Medal for their extensive contributions to New Urbanism in the US and abroad. DPZ has implemented new urbanist town planning and design principles in more than 300 new and existing communities around the world. DPZ is headquartered in Miami, Florida with affiliates in Europe, Asia and Latin America. 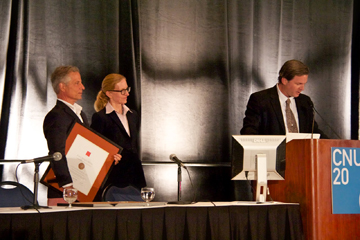 Recipient Posthumously: Robert “Bob” B. Kramer (1944–2011) | On the occasion of the twentieth annual CNU Congress, held in West Palm Beach, Florida, the Florida Chapter of the Congress for the New Urbanism posthumously awards this Medal to Bob Kramer. As the highest possible honor conferred by the Chapter, this award recognizes superior effort in furthering the principles of the Charter of the New Urbanism in Florida, providing our state with examples of exemplary performance and achievement to which all may aspire. 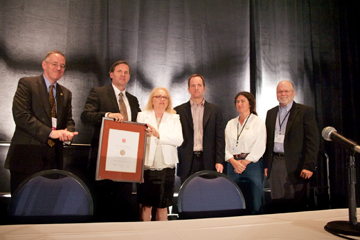 Recipient, Donald Martin | The Florida Chapter of the Congress for the New Urbanism awarded Don Martin for his contribution to New Urbanism in Winter Park, Florida. Don, former planning and community-development director for the City of Winter Park, guided the City through its main street redevelopment implementing the Park Avenue Plan of Dover Kohl & Partners. Currently, he is the principal-in-charge of Martin and Vargas Design, a company with offices in Winter Park and Nicaragua. 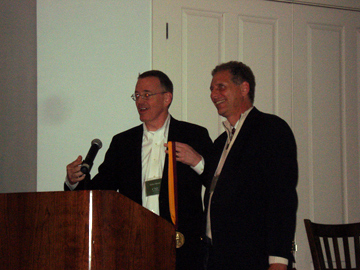 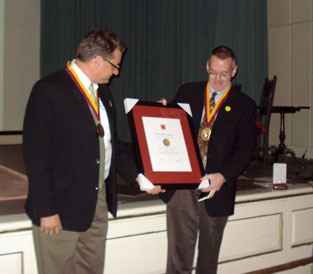 Joe Kohl and Victor Dover of Dover, Kohl & Partners with their Nolen Award

Recipient Walter Kulash | Walter Kulash is a traffic engineer who specializes in “livable traffic” design, a view of traffic engineering that recognizes that the narrow traffic planning goals of the past few decades—moving the most traffic at the greatest possible speed—are giving way to a far more inclusive view. In the new view, traffic performance is balanced against other desired qualities of the street, such as its value as an “address,” its retail friendliness, and its role as a premier public space of the community. Mr. Kulash’s clients include cities, developers, state DOTs and advocacy groups. 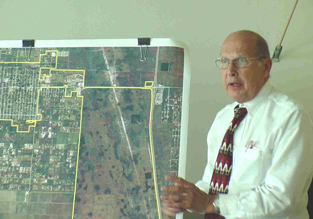 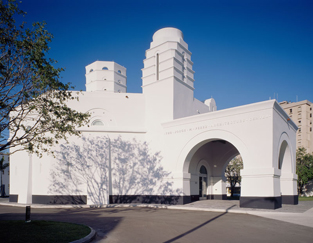 University of Miami's School of Architecture

Recipients Robert and Daryl Davis | The Florida Chapter of the Congress for the New Urbanism recognized the contributions made by the developers of Seaside, Florida by awarding them the 2006 John Nolen Award. Robert and Daryl’s work in Seaside has influenced an entire generation of architects, developers, planners, elected officials, traffic engineers, and people from all walks of life. The recipients provided a vital platform and played a hands-on role for experiments in urban architecture, place making, coding, real estate development, landscape architecture, urban retailing, and a dozen other areas of critical concern for the community-building professions. 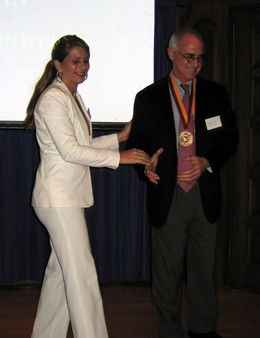 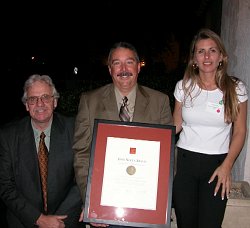 This prestigious honor, awarded only on occasion, recognizes an individual with exemplary talents in traditional architectural and urban design. Charles Barrett, who passed away in 1996, was a man of extraordinary passion and talent. During his tenure with Duany Plater-Zyberk and Company, Charles’s work defined the highest level of design discipline and beauty and became a trademark for the CNU in its formative years. Charles’s spirit lives on in his drawings, in the colleagues he influenced, and in the communities that were built because of his drawings. This award preserves the memory of the standard he set for others to emulate.

Recipient James Dougherty | James Dougherty, Director of Design at Dover, Kohl & Partners, has dedicated his career to help communities envision and implement a more sustainable future. His graphics, illustrating sustainable urban design and form-based code principles, have been published in over a dozen books and serve as examples of good traditional architecture and urban design. 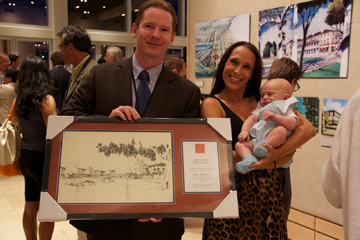 James Dougherty receives the award next to his wife and son at the CNU 20 Art of the New Urbanism Reception in West Palm Beach.

Recipient Juan Caruncho | Juan Caruncho is the founder and principal of Caruncho Professional Association, an architectural firm in Miami. Juan received a degree in Architecture from the University of Miami and was apprenticed at Duany Plater Zyberk and Company. Juan's talents and dedication have been repeatedly shown throughout his work and have resulted in the creation of extraordinary examples of neo-traditional architecture and urban design.

Recipient Ernesto Buch | Ernesto Buch, recipient of the Charles Barrett Award, is the principal of architectural firm Ernesto Buch Architect, Inc., founded in 1987 with offices in Miami, New Haven, and Punto Cana Dominican Republic. The firm specializes in Classical/Traditional architecture and urbanism and is committed to an architecture that is responsive to its physical setting. The firm very strongly believes that a building must be an integral part of its surroundings and respectful of its historical context and building traditions. 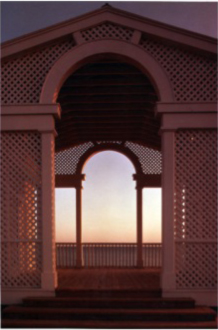 Recipient Scott Merrill | For more than two decades Scott Merrill, and his firm Merrill, Pastor, and Colgan, has consistently designed and built projects which are timeless, inspiring, and have influenced countless other designers. Mr. Merrill has given a gift to Florida in his architecture; and through the creativity, discipline and professionalism exhibited throughout his career, he has given a gift of example to us all.

The Laws of the Indies Prize

The Laws of the Indies Prize was conceived to remember the contribution of European and Spanish explorers and settlers of the “New World,” including Florida, the Americas and lands of the Caribbean Basin. It was further conceived as a prize to be given once a decade to an individual who has made lasting and influential contributions to sowing the seeds of urbanism far and wide in this Region of the world, especially in Florida.

Recipient Leon Krier | Leon Krier, architect, architectural theorist and urban planner, has had great influence in the New Urbanism movement, particularly through his campaign for the reconstruction of the traditional European city model. Out of the three buildings designed by Krier that have been built, two of them are located in Florida: a house in the resort village of Seaside and the Jorge M. Perez Architecture Center on the campus of the University of Miami.