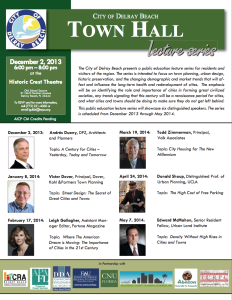 The City of Delray Beach presents a public education lecture series for residents and visitors of the region. The series is intended to focus on town planning, urban design, historic preservation, and the changing demographic and market trends that will affect and influence the long-term health and redevelopment of cities. The emphasis will be on identifying the role and importance of cities in forming great civilized societies, any trends signaling that this century will be a renaissance period for cities, and what cities and towns should be doing to make sure they do not get left behind.

This public education lecture series will showcase six distinguished speakers. The series is scheduled from December 2013 through May 2014.